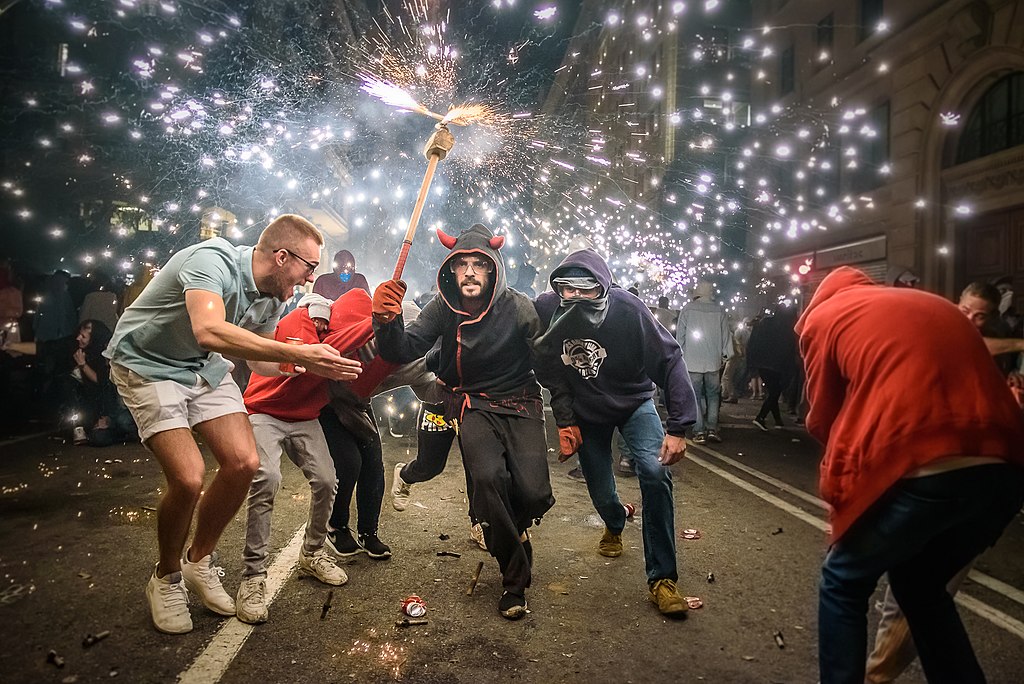 El Correfoc is a fine thing; rapid explosions of light, pounding drums and the beating of hearts running on pyro-induced excitement. It’s difficult to find such sensory treats in our modern cities and this is exactly why, if you have the chance, you should put yourself in the center of the action.

The fire-run is a Catalan tradition whereby bands of devil-clad community groups (Colles de Diables) parade through the streets accompanied by multiple other papier-mâché menacing beasts; think gargoyles, dark phoenixes and terrifying Zuul like characters. At first sight, it all looks like some ancient tradition but in reality, the run as it is today is a relatively new phenomenon.

Although fire and demonic characters have always been a feature of Catalan folklore, dating as far back as the 15th century, the conception of the “Correfoc” can be traced to La Mercè of 1978 when the city council decided to give festival proceedings a boost by promoting a fire procession that would present and showcase these past folkloric elements.

At the event, instead of remaining at a safe distance, onlookers decided to taunt the beasts; getting as close as possible in a show of defiance. Some have noted the obvious parallels here between citizens recently freed from the authoritarianism of Franco and their desire to push back and break free of prior evils. Whether this happened as a conscious socio-political protest, or just as a culmination of greater general freedoms within society at the time, it is unclear. But by 1979  the Correfoc was on its way to becoming what it is today; an opportunity to express oneself freely within the public sphere, surrounded by energy and set against the backdrop of a certain visual evil.

This is the way I see the Correfoc today, that it represents an opportunity for us all to come together, dance and run wild, in close company and celebratory avoidance of that which is shitty. Barcelona, like all modern cities, is challenged by many difficulties. A lot has been written recently about how the city is changing for the worse; how tourism is killing Barcelona’s unique character, how political dispositions are preventing societal cohesion, and how nobody can afford to live downtown anymore.

These are indeed all very shitty and very real problems and the solution to them lies not in adopting easily palatable biases but in listening carefully and figuring out how to navigate them all together, like a collaborative dance. The fire run poses an opportunity for us all to forget our grievances for a little while and come together in celebration of playfulness. What’s more, it is something so wonderfully unique to the streets of Barcelona that it makes being here for La Mercè a genuinely unforgettable experience that should be cherished.

When you first see a Correfoc it strikes you just how real the flames in front of you are. We are not used to seeing such exuberant and chaotic displays of human expression in our modern cities and this is exactly what makes it all so exciting. The interplay of fire, dance, and music is hypnotic and the omnipresence of a potentially dangerous raw element can teach us all how important play is.

Our fascination with fire is well documented and its ability to send us into a meditative state comes from the evolutionary importance it had in providing us with warmth, cooked meals, and protection from predators. A study conducted back in 2012 found that fire has even had an effect on our cognitive abilities, it allowed us to develop long-term memory functions through the steady regulation of sleep patterns.

The fire on display at La Mercè’s Correfoc is a raw and natural thing and it is, for this reason, we should celebrate it. In the future there will most certainly be those who try to fire-proof this event, making it just another gimmicky parade, devoid of its true essence. It is in this kind of safety-obsessed society that we lose the sense of that which is human and indeed that which we all share.

On the night of the Correfoc, Via Laietana and its surrounding streets are overflowing, packed out in the dark and booming with energy as thousands await the candescent rawness of real light. This is perhaps one of the closest things I have ever seen to a true adult playground. In the sense that it is fully geared towards pushing the general public into excitement and play. Fully grown adults shed their inhibitions and charge through the streets like children; it is this kind of playground atmosphere that we all need once in a while.

I was recently watching an excellent TED talk by Dr. Stewart Brown. Dr. Brown is a pioneer in research on play and it really resonated with me when he said, “the basis of human trust is established through play signals. And we begin to lose those signals, culturally and otherwise, as adults”. A great deal of his research focuses on just how integral continued play into adulthood is for human development and cohesion. This made me think about what exactly it is I enjoy about the Correfoc. It is at once both an incredible and unique celebration as well as a great incentive to play and share in the same positive sensations amongst a group of strangers. We should protect such public festivals and ensure they don’t lose their spark.